(West Kelowna, BC) A West Kelowna winery is feeling proud following their win at the Chardonnay du Monde® competition, held from March 8th to 11th in France.

Kalala Organic Estate Winery has placed in the Top 10 twice before (2010 and 2014), but this year marks their biggest win yet. Of the 782 wine samples from 39 countries that entered the competition, the Kalala 2013 Chardonnay Icewine received the highest number of points, granting them the top spot in the prestigious competition.

“This is a great honour, not only for us, but for Canada and the Okanagan,” said Karnail Singh Sidhu, owner and viticulturist at Kalala Organic Estate Winery. “This is a very competitive competition, so it is wonderful to be recognized at this level, among some of the best winemakers in the world.”

The Chardonnay du Monde® is unique in its international scope and diversity; In 2016, the competition welcomed 300 international expert judges, in addition to the tremendous number of global entries. The competition also encourages a strict focus on quality, involving a rigorous selection process for judges and the use of scientific criteria for tasting. To ensure sensory isolation for the judges, the number of samples is limited to 20 per panel, allowing them to taste the wine at an appropriate pace.

“Our 2013 Chardonnay Icewine uses certified organic grapes that were grown in West Kelowna at the Catana Vineyard. We started picking the grapes on November 14th and we picked 3.7 tons of grapes,” explained Sidhu, who has more than 20 years of experience in organic agriculture.

The West Kelowna winery produced 1,220 L of this particular vintage, which underwent a slower, 68-day fermentation and partial barrel aging. The method clearly paid off, as the judges awarded the wine a top gold medal. The 2016 competition saw a total of 259 medals awarded to participants, including 63 Gold and 196 Silver medals.

“Awards like this one continue to put both Kalala and the Okanagan on the global map. The Okanagan is still a young wine region, but through these competitions, we are able to share our success and incredible wines with the world.”

The Chardonnay du Monde® international competition recognises the world’s best Chardonnay wines by awarding them with reliable and representative medals. This competition is based on a single conviction: distinctive marks of quality are the key to real differentiation and therefore enhancing the value of the awarded wines in this highly competitive market where the array of products becomes more vast each day.

Kalala Organic Estate Winery is located on the Upper Bench West Kelowna in the Okanagan Valley. Started by Karnail Singh Sidhu and family, Kalala has been making award winning, reasonably priced wines since July 2006. The vineyards were deemed certified organic in September 2010. Their philosophy is to allow the varietal characteristics and terroir to be truly expressed and only enhanced by minimal handling during winemaking.

High Resolution Images for the Release: 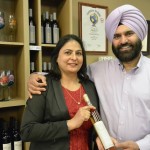 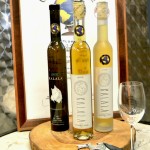 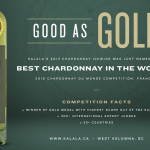 Open Wednesday to Sunday, 11am to 5pm

Signup to receive member only deals & info on upcoming events.